Lignano is an Italian town in the province of Udine (Friuli-Venezia Giulia), fraction of Latisana. Lignano is divided into three districts Sabbiadoro (town hall), Pineda and Riviera. Honored with the blue flag. In the thirties of the twentieth century, it became a tourist area.

1926: Opening of the first municipal road between Lignano and Latisana, allowing the birth of a new settlement.

1935: A promotional purposes, added the word in Lignano Sabbiadoro.

In summer the urban bus service run by Saf Autovie of Udine.

It also has a maritime service of ferries connecting Lignano with Marano Promenade.

Built in the 60s, it is one of the main symbols of Lignano. It is access from the main entrance of the beach. There is a beautiful walkway to go and at the end you find yourself in a “round the sea”, with many tables and chairs available for sunbathing.

We find a restaurant-bar, and shops. Both are open from morning until evening. The bar stays open until 4 in the morning for very special events based on live music or DJ set.

Lignano also devotes a beach for families who want to spend their holidays together with their dog. . “DOGGY BEACH”, located in Via Lungomare Marin near office Number. 1.

It is a structure near the city hall turned to concerts, beauty contests and was the seat of many well Festivalbar.

Lignano also has a beautiful zoo with many species of animals. Also a fun area for children.

This water park is just a few steps from the amusement park for children Gulliverlandia Ext.

It was one of the first water parks to be opened in Italy: 1985. 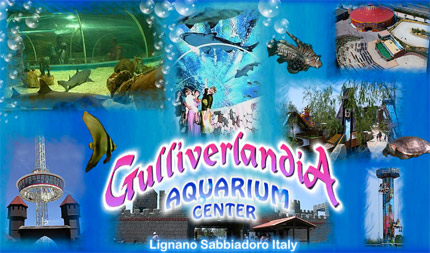 It’s a theme park that is divided into different areas. Divertitimeno park dedicated to children and families. Beautiful aquarium will attract many of you with many species of tropical fish and more.

But thereís more, for younger children, the magnificent Circus Gully offering great entertainment for everyone thanks to the presence of clowns, jugglers and fantastic sea lion show.

A great new feature is the “Panoramic Tower” with its 60 meters high offers a spectacular view of Lignano.

One of wonderful places to visit for a romantic walk during sunset in the sea. From a distance you can see a small island with trees (pines), called “Island of Shells”, reachable by boat.

One of the more famous parks of Lignano and definitely the park dedicated to the writer Hemingway, Which spent winning holiday Lignano for reasons of work or holiday.Park Dedicated to the greatest comments and smaller. For children, the garden has a bike path and playgrounds. For larger the comments of a park dedicated shows or concerts. Come every year, to dare start to the summer season, the park takes place the Flower Festival. The magnificent Frecce Tricolori in the sky what whizzing every year, thousands of tourists passionate.This year the show of the National Acrobatic It happened Sunday, July 12, 2015. That will assist the ten MB-339 of the Frecce Tricolori.

Also in Lignano, Bibione and have come to ALL years, the Beach Arena will hold the Festival Show, with many guests. The show begin to 21. The presenter and represented by A Mediterranean beauty, Giorgia Palmas.

Two days dedicated to one of the Most Beloved Sport from the boys, big and small. Soccer. However, this time the novelty and this: beach soccer, football played exclusively on the sand. Tournaments, music and so many emotions will accompany you in due these fantastic days of June.

Come to ëEleventh Edition, the Sand Crib and ready to enchant again with His 4,000 tons of sand of Lignano.The exhibition on the beach you FIND a Terrace and Sea and visited from early December until early January.