It’s an Italian town in the province of Treviso (Veneto), where the river Monticano. The territory is completely flat, placed in the heart of the Veneto plain. It is a large rectangular square and has a special feature: shape stage.

In the south of the square, once the city walls, the center opened the door trevisana finding the exit to go to Treviso.

Currently it is the famous Torresin, symbol of the city. 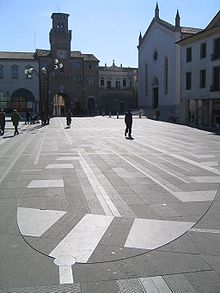 It’s a probably the largest in Italy. Its role is to act as a calendar thanks to the shadow of the cathedral’s pinacol.

Initially his style was Romanesque -Gothic, however, was spoiled by the work done over the centuries.

The great restoration of the square took place in 1992 by the architect Toni Follina, made ??so a square adjacent to pedestrians with realization of the actual flooring. At that time other major restorations: Torreson and all the buildings facing the square