Plamanova is located in the province of Udine. It ë was founded on Oct. 7, 1593. Called “star city” in for its polygonal star with 9 points. Another peculiarity hexagonal square, is the heart of the old town of Palmanova was created by the Venetians in the seventeenth century. He was also training ground for military exercises during the Serenissima Republic with a central high standard, is a symbol of the fortress itself amicably called by the inhabitants of Palmanova, “Mario”.

Palmanova during the First World War was the seat of hospitals, warehouses and training ground troops, with defeat of Caporetto the town was a victim of serious devastation.

At the end of Worl War II it was located a center of repression anripartigiano (Caserma Pieve).

The President of Republic a “National Monument” decreed Palmanova, in 1960.

They are of the gateways and the buildings are seen from the outside of the fort. Need for military and defense, the access is limited.

These monuments give name to the three main streets, villages, which lead to the Piazza Grande.

Built in 1598. It looks more elegant than the other two doors because setting up the input representation for distinguished guests and the General Superintendents during the Serenissima Republic.

Built between 1604/1605. The two wheels that raised the drawbridge are still inside the walls. 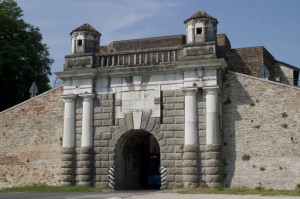 PORTA CIVIDALE it too created around the 1604 to 1605. The facade is made of rusticated (grey and white stones). Compared to the other, this has a more rough, given the presence of the guard towers connected by the balustrade 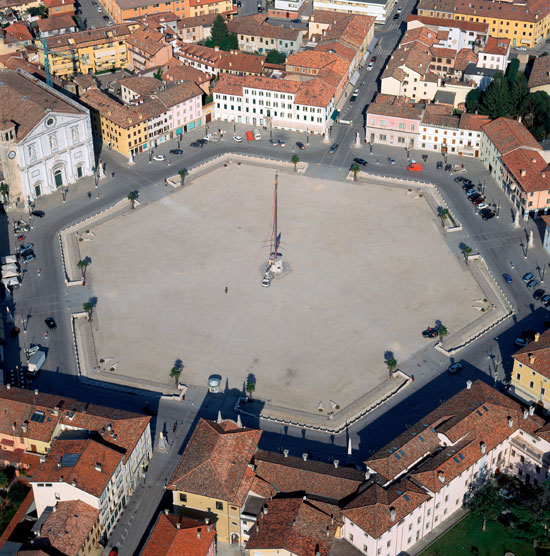 It is one of the most prestigious buildings of Piazza Grande thanks to its majestic bell tower. It is the most important church in the city, built around the first half of the seventeenth century.

The building contains the architectural style of Venetian Palladian inspiration, while the interior decorations are Baroque.