Sesto al Reghena is positioned in the lower plain Venetian – Friulian, on the border with the Province of Venice in pre-Roman times as many archaeological findings confirm.

Sesto said it was a “statio”, a military willing to place sixth milestone of the road Concordia connected with the Norian.

The current name of Sesto al Reghena dating back to 1867, when Friuli was united to Italy and references to Reghena River, that crosses the country. 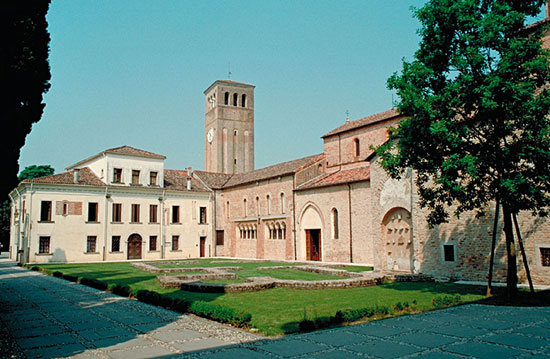 ABBAZIA BENEDETTINA DI SANTA MARIA IN SYLVIS: The abbey was founded in the first half of the VIII century. It characterized by a large exhibition of stone artifacts and sculptures from Roman times through the Middle Ages and frescoes of the school of Giotto . Destroyed by the Hungarians in 889, the Abbey strengthened himself and attributed the appearance of a medieval castle with defensive formed by towers and moats.

This fountain is located in the park literary Ippolito Nievo, dedicated to the writer from Friuli because he sang the fountain and the stream that are in the pages of ìîconfession of an Italianî, a novel with a political and patriotic, which ended in 1858.

The atmosphere despite various changes, shows exactly the flavor and rustic country suggested that the place to Nievo. There are numerous stream and springs where is located the fountain of Venchiaredo.

This website uses cookies to improve your experience while you navigate through the website. Out of these, the cookies that are categorized as necessary are stored on your browser as they are essential for the working of basic functionalities of the website. We also use third-party cookies that help us analyze and understand how you use this website. These cookies will be stored in your browser only with your consent. You also have the option to opt-out of these cookies. But opting out of some of these cookies may affect your browsing experience.
Necessary Always Enabled
Necessary cookies are absolutely essential for the website to function properly. This category only includes cookies that ensures basic functionalities and security features of the website. These cookies do not store any personal information.
Non-necessary
Any cookies that may not be particularly necessary for the website to function and is used specifically to collect user personal data via analytics, ads, other embedded contents are termed as non-necessary cookies. It is mandatory to procure user consent prior to running these cookies on your website.
SAVE & ACCEPT